Recently we received an email from some good customers in Eagle River, Alaska, who own several of Ted’s dizzy bowls. One was a bowl we named Marmalade because its color scheme resembled the orange stuff you’d spread on toast. Unfortunately, it was a casualty of the November 2018 magnitude 7.1 earthquake that caused millions of dollars in property and infrastructure damage to Anchorage and the surrounding area. The owners sent photos of the bowl, broken into three pieces, and wanted to know if there was any hope that Ted could restore it. From the pictures, Ted couldn’t tell if it was repairable but advised them to send it down to Homer and he’d give it his best shot. 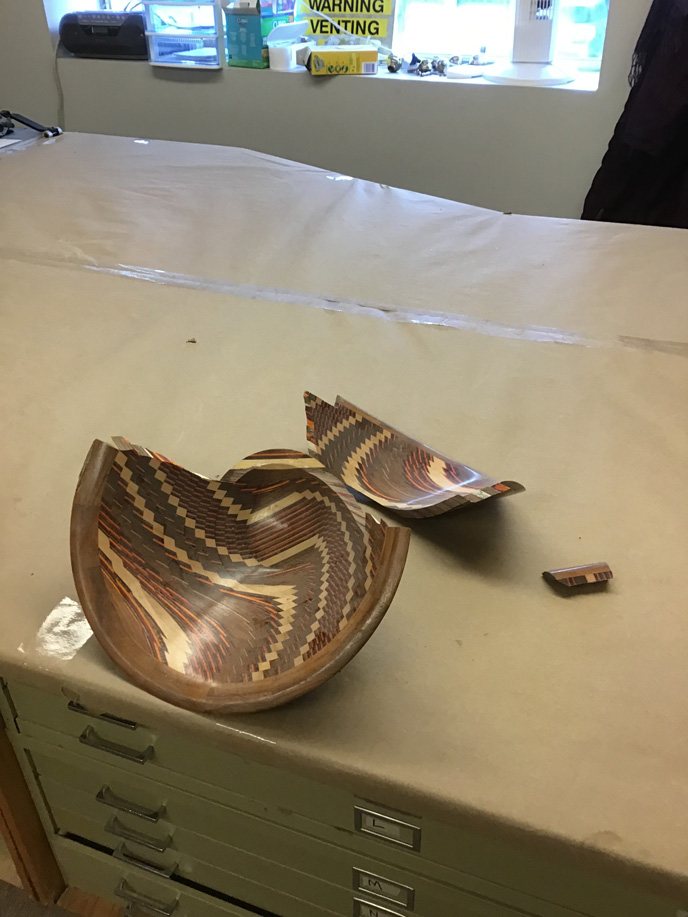 Fortunately, the three pieces fit together reasonably well but the bowl needed a lot of work. Dizzy bowls are segmented bowls requiring meticulous cutting and gluing of individual pieces of wood. You can check out our What Is a Dizzy Bowl? article for photos and information on the process used to create this type of bowl.

The rim, which was likely the point of impact, sustained considerable damage. Some of the breaks ran along glue lines. Others were through the wood itself. This was going to be a challenge. Ted renamed the bowl Earthquake Bowl and began the restoration process. 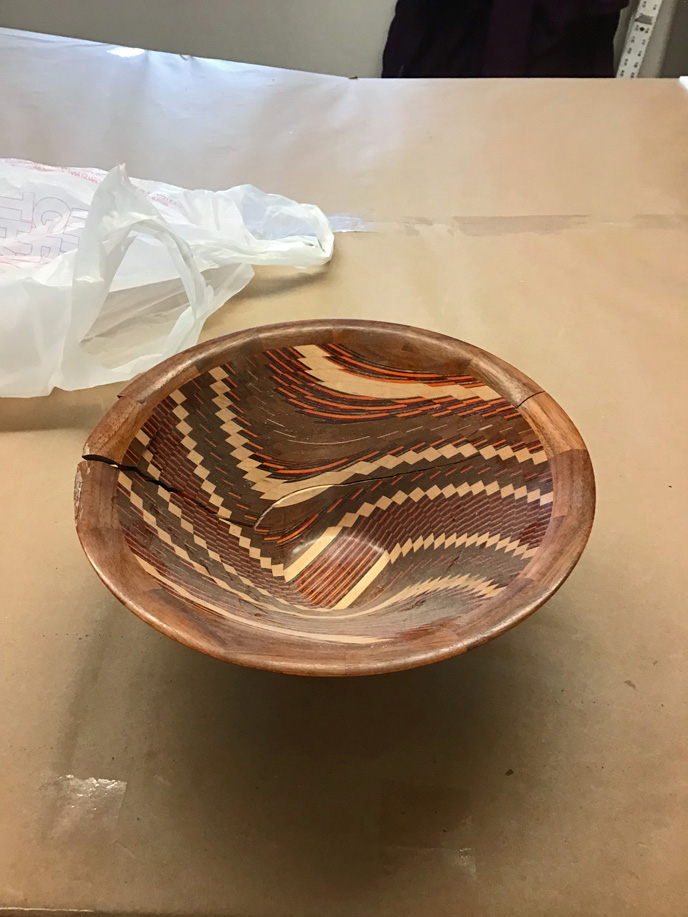 Ted relies on clamps to secure pieces of wood during the gluing process. But for this project, clamps wouldn’t work to hold the tapered pieces of the bowl together. For Earthquake Bowl, he used Gorilla tape and two adhesives. He used Titebond III to glue the pieces together and 2P-10 quick-cure adhesive to fill the hairline cracks. 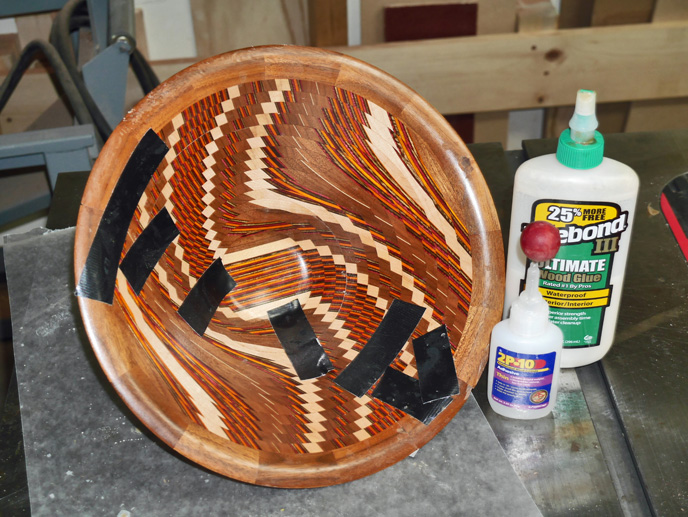 The process wasn’t pretty, but carefully and patiently he glued the broken pieces together. Titebond III, used to laminate the layers of wood in the original bowl, forms bonds that are stronger than the wood itself. 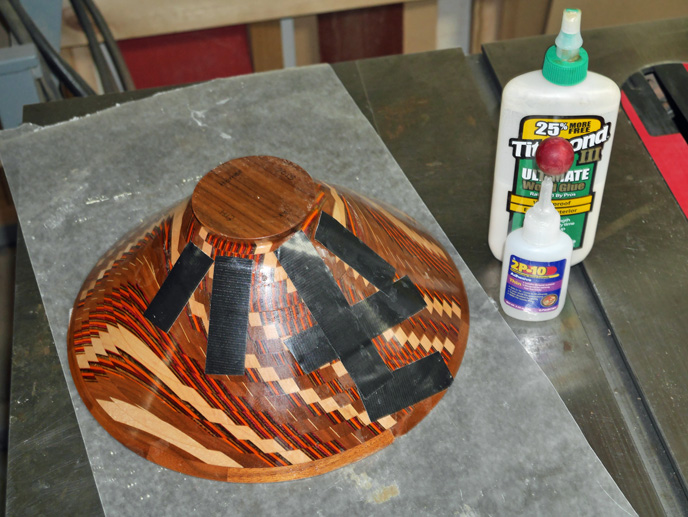 Lots More Gorilla Tape on Outside of Bowl

Spinning on the Lathe

After reassembling the three pieces, it was time to attach the bowl to the lathe and re-turn it. Because the base of the bowl was tapered, Ted couldn’t securely grip it in the chuck.  He added a piece of walnut and some maple veneer to the bowl base and turned it to form a point of attachment for the chuck. Turning removed all the dings in the rim, glue residue, and surface irregularities. Ted had to reshape the rim a bit to remove the impact damage. After turning, the bowl retained its original shape but had a slimmer rim. 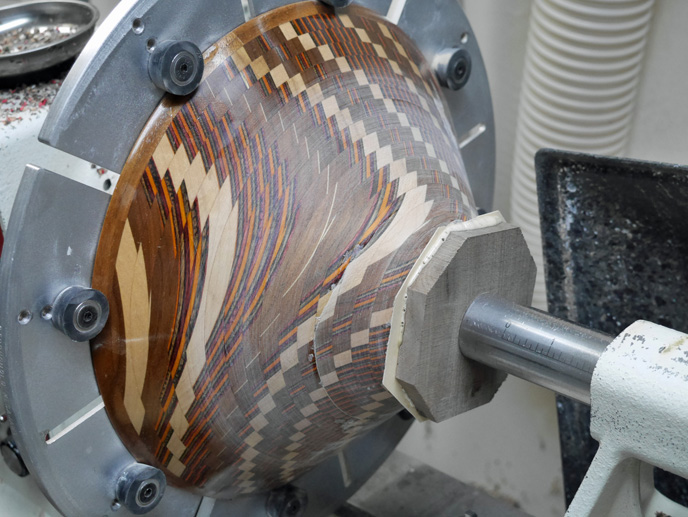 Gluing on the New Base

Turning the bowl removed all the old finish and left it ready for sanding. Ted power sanded the bowl with 150 and 220 grit abrasives and then finished up by hand sanding with 400 grit sandpaper, all while spinning the bowl on the wood lathe. 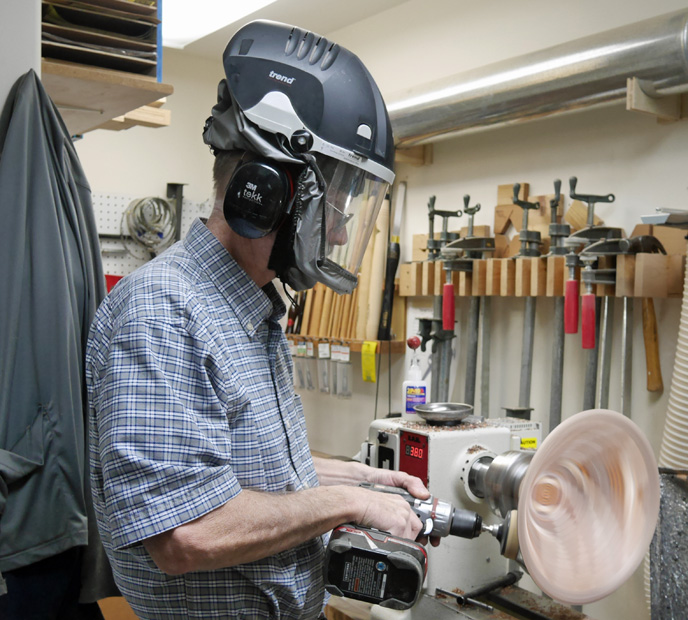 With the bowl off the lathe, it was time for the finishing process. 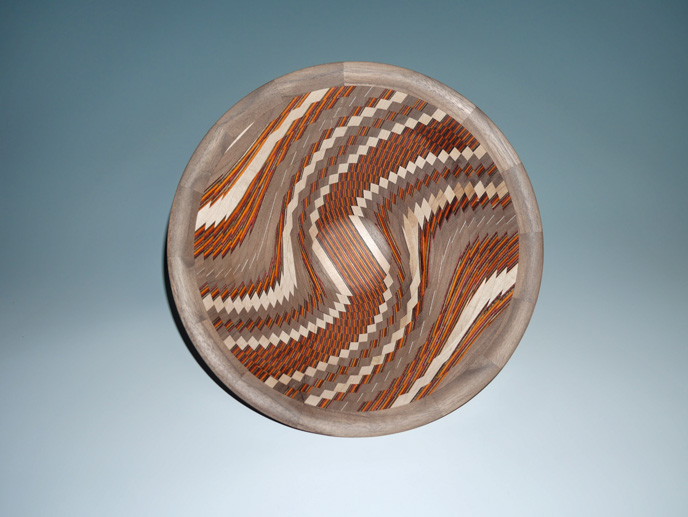 Ted signs and dates every bowl. He re-signed the bowl with his initials and the original creation year of 2015, the date of the 7.1 2018 earthquake, and the restoration date of March 2019. 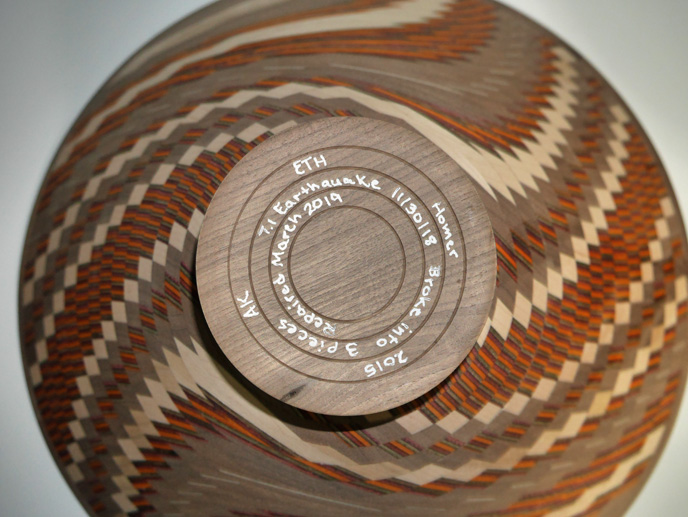 As with the original bowl in 2015, Ted applied multiple coats of gloss polyurethane finish, wet-sanded between coats. He applied one coat a day until he was satisfied with the appearance. 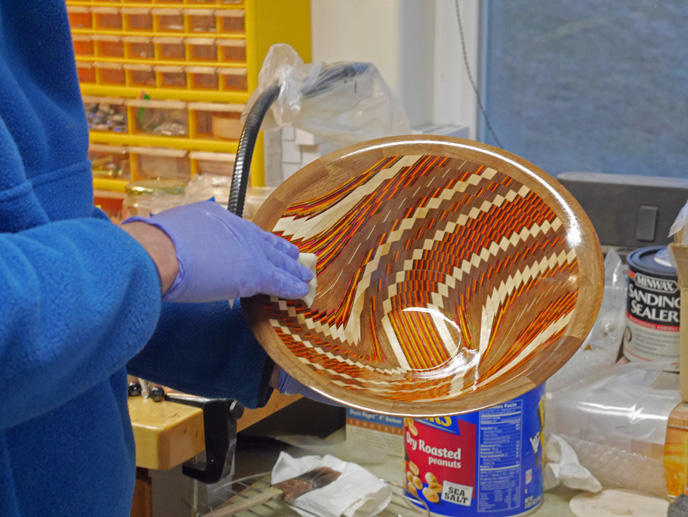 In critiquing the finished restoration, Ted opined that the “busy” nature of a dizzy bowl’s intricate colors and patterns helped to minimize the evidence of the repair work. Although I know where the breaks in the bowl occurred, I would be hard pressed to locate them. Well done, Ted. 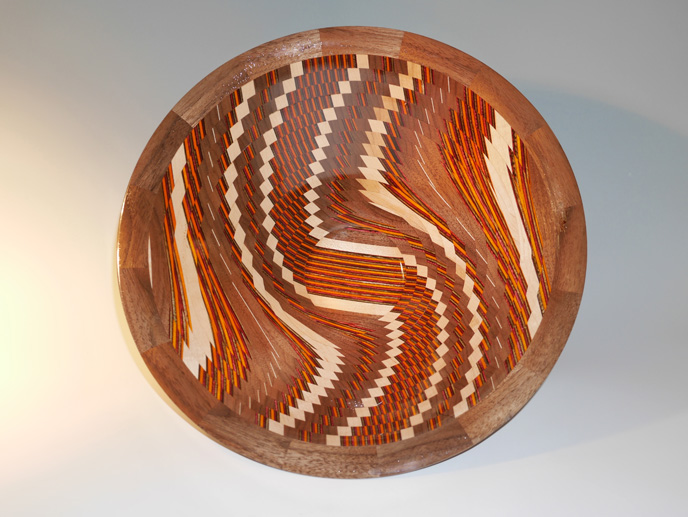 Earthquake Bowl, aka Marmalade, After Restoration

For the owners of the bowl, it will be one of many lasting reminders of the November earthquake. We were glad to be able to play a small part in their recovery efforts.