“Into the Woods” — A Collaborative Show

For the month of September, Ted and two fellow Ptarmigan Arts woodworkers combined their talents in a collaborative show entitled “Into the Woods.” Joined by woodturner George Overpeck and master of marquetry and stone lamps Dan Fischer, Ted had the opportunity to showcase his work in the co-op’s Back Room Gallery display space, which is home to a series of monthly shows. 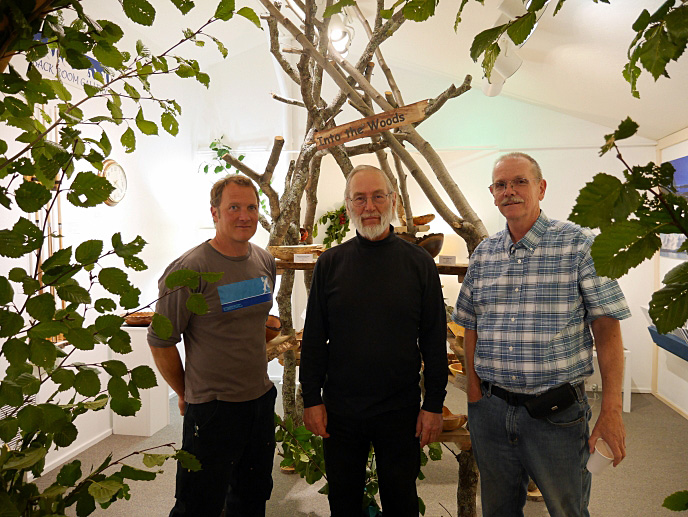 The work of the three artists varies in style and yet is complementary. Turner George Overpeck uses local woods such as Alaska birch and cottonwood to produce thin, almost translucent, bowls and spheres. 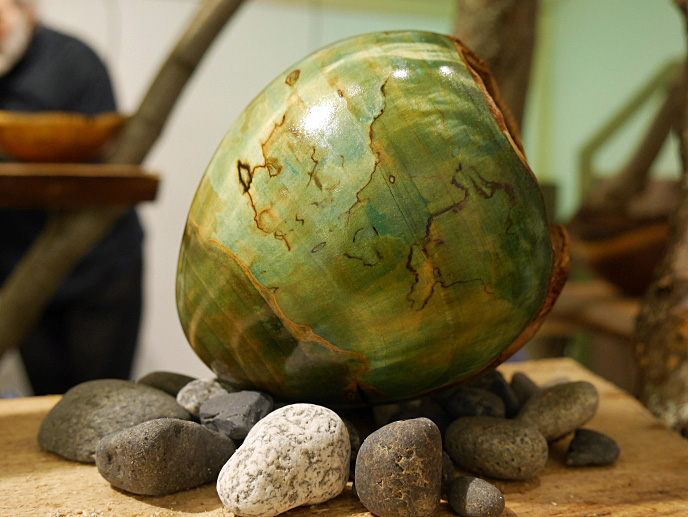 Dan Fischer works with veneer to create one-of-a-kind masterpieces, which for the show included a marquetry pedestal and a hanging light fixture. His driftwood and stone lamps with veneer shades and a sculpture from beach stones and driftwood provided visual and dimensional contrast to the work of the turners and displayed another element of the natural beauty of wood. 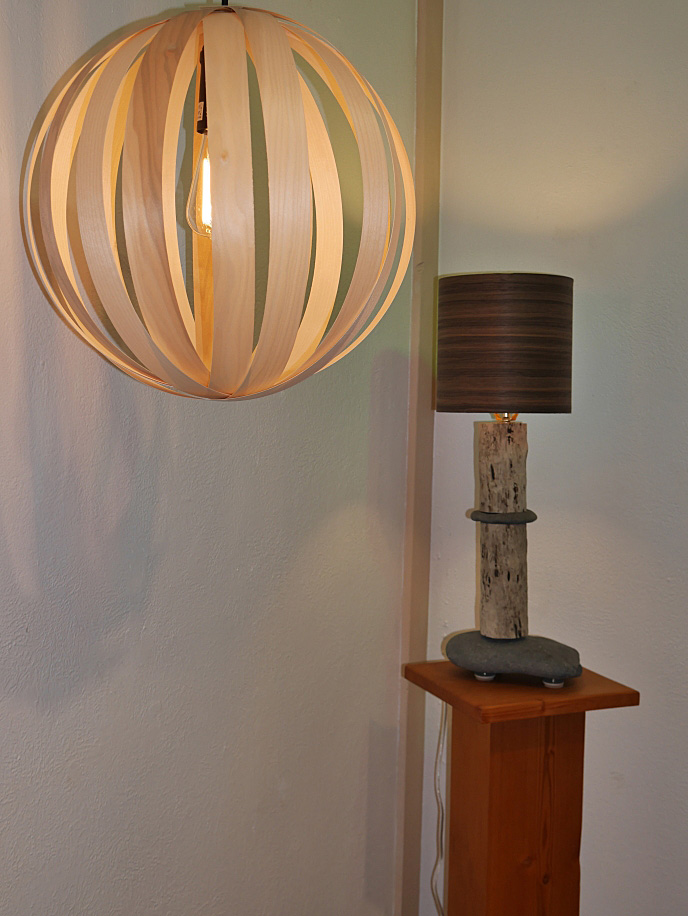 Ted created a series of new works for the September show, including a set of three radially laminated pool cues, a walnut and figured maple wall clock, and a spalted figured maple pepper mill with a wenge base. 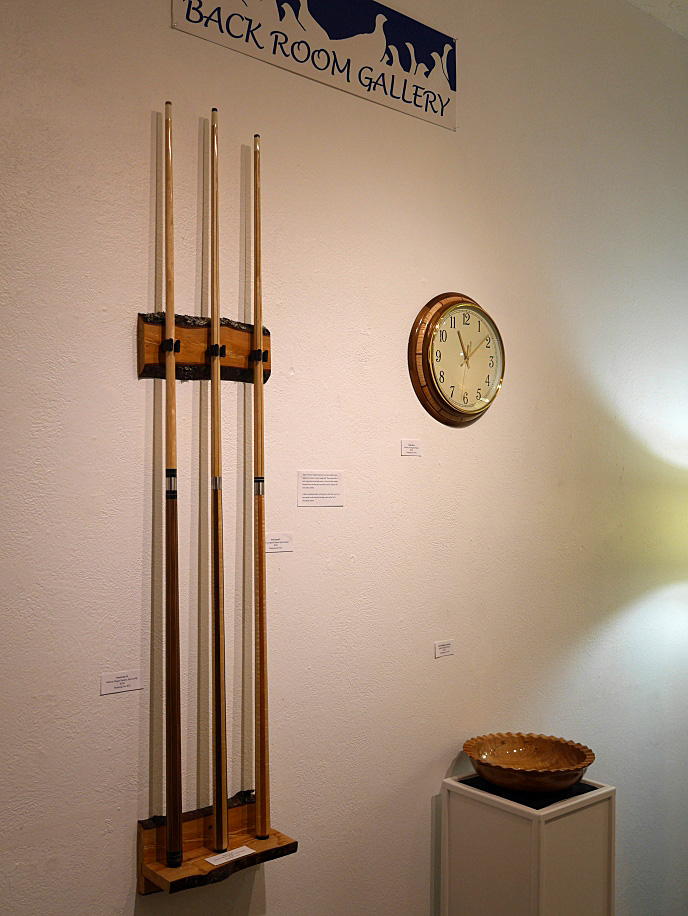 Natural edge bowls turned from cherry and walnut, two ambrosia maple bowls, and a blackline spalted maple open bowl with a food-safe finish were among the items Ted made for the show. 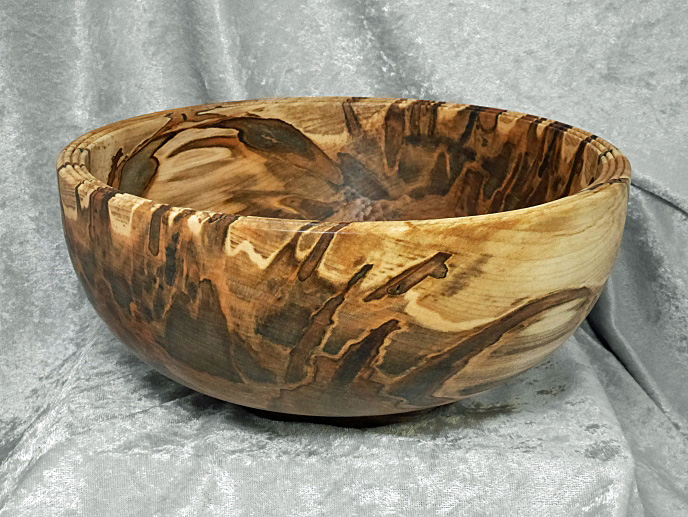 Ted’s newest Dizzy Bowl, titled “Fire and Ice,” was displayed for the first time at the show. This piece, which has a separate matching base, was turned from SpectraPly, figured maple, and dyed veneer. 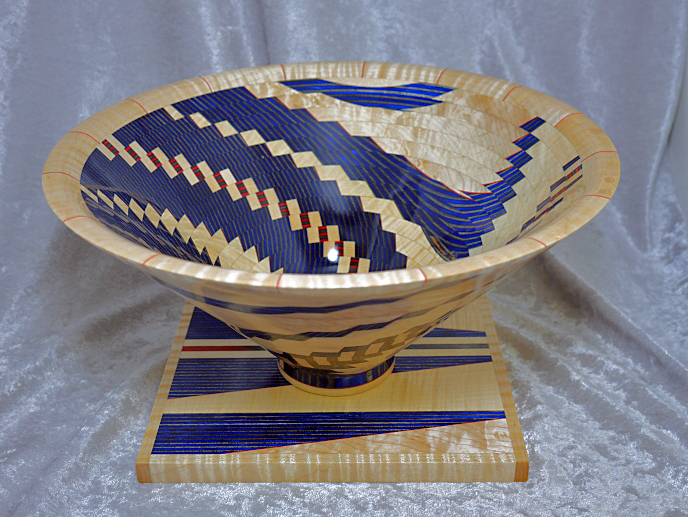 Sometimes a turner will hold onto a piece of wood for years until an idea comes to mind. Such was the case for a beautiful block of spalted figured maple, which Ted had purchased over ten years ago. The block, too large to turn on his old 12” lathe, made the move with us from Fairbanks to Homer in 2008 and sat in the shop for years.  After Ted upgraded to a 16″ lathe, that block now exists in the form of a 13” open bowl with a fluted rim that he turned for the September show. The figuring is exquisite. The bowl is finished with Watco Danish Oil, with several top coats of gloss polyurethane finish. 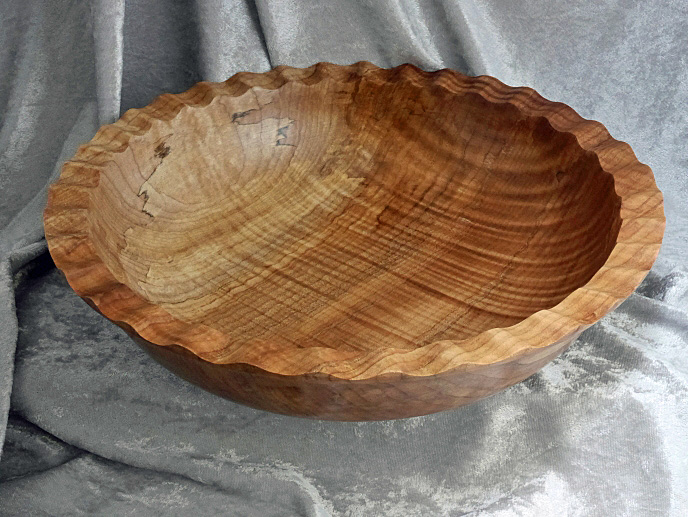 George had the idea of an alder arbor that would serve as a display area in the center of the Back Room Gallery. He and Ted spent the better part of a day cutting down alders, cleaning up some rough-cut spruce planks that would serve as shelves, and assembling the alders into a stable structure. 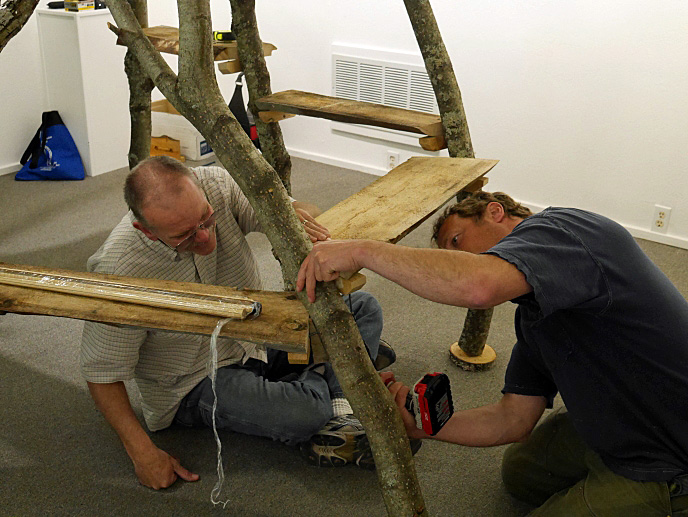 Putting it together may be easier than taking it apart at the end of the month. 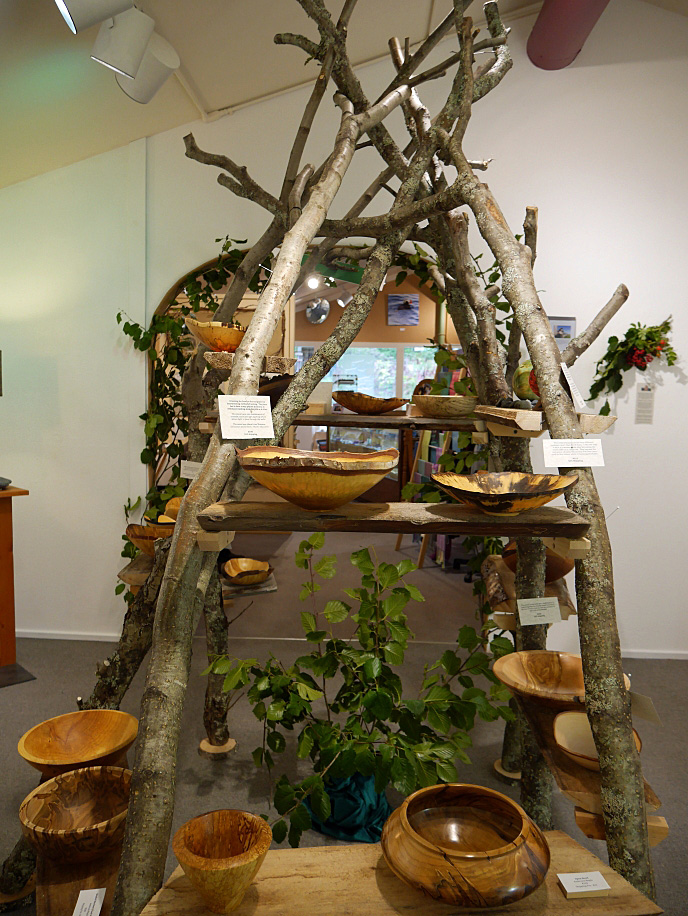 Dan embellished the display area with alder leaves and branches and temporarily replaced two of the white flood lights with green bulbs, giving the Back Room Gallery a warm, inviting, and woodsy feel. 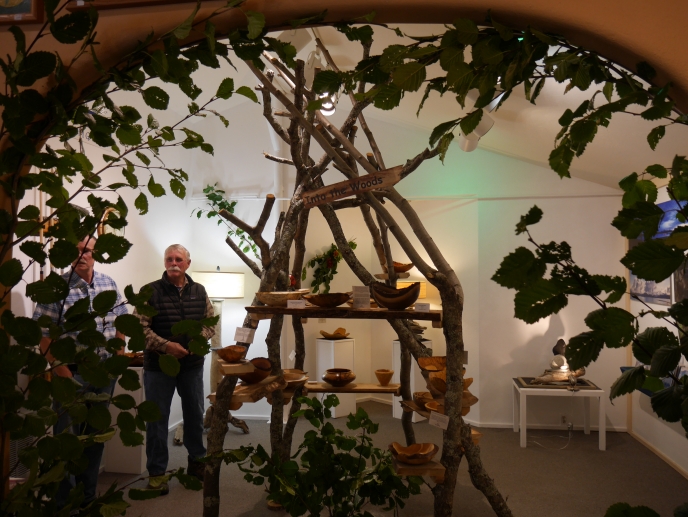 The show opened with a reception as part of the First Friday events that take place each month in Homer. These two-hour receptions allow the artists to meet and greet visitors and talk about their work. Fellow Ptarmigan Arts members volunteer their time to serve as reception cashiers, take care of set-up and clean-up tasks, re-supply the refreshment table, and assist customers and visitors. 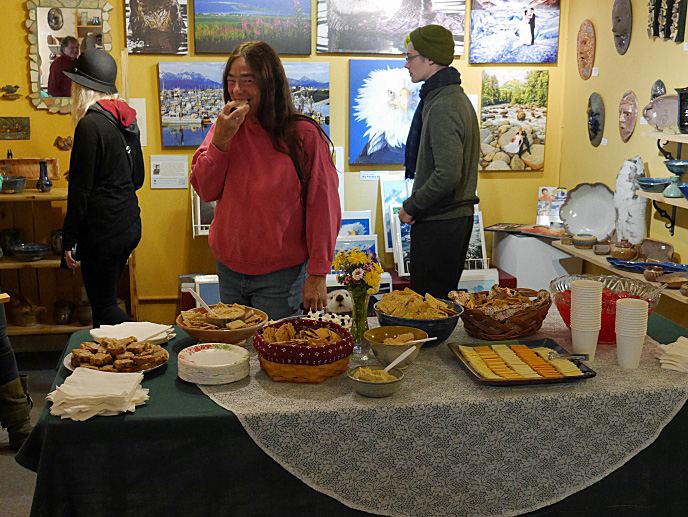 “Into the Woods” was well-received, with many compliments directed to the woodworkers whose exceptional talent and combined years of experience produced a lively and fun event for the Homer community. 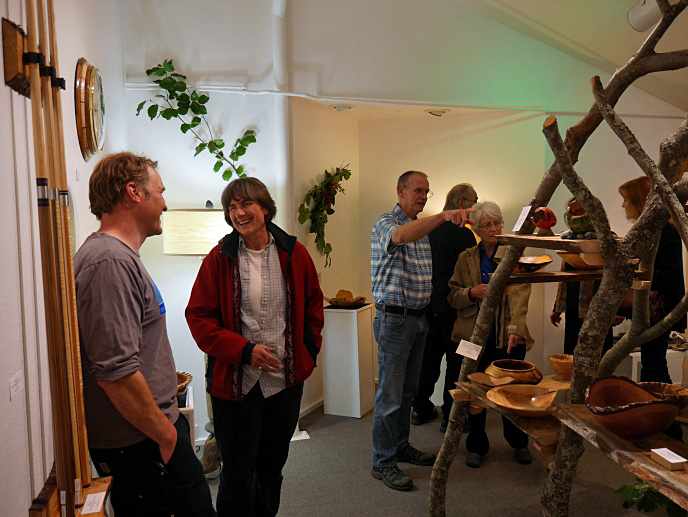 The Woodworkers Enjoying the September Show

All items in the show are for sale.  Customers may pick up their purchases at the conclusion of the show at the end of September or may make arrangements to have their items shipped to them. 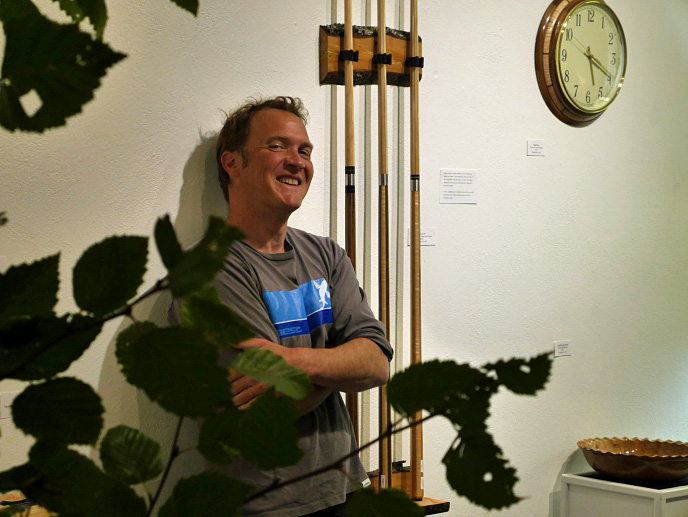 George Was Pleased About Selling a Bowl at the Show