From his winter home in Florida, our friend Sam sent Ted a large waxed block of Norfolk Island Pine.  This coniferous tree (Araucaria heterophylla) is native to the southern hemisphere, specifically to Australia and the Norfolk Islands of the South Pacific.  South Florida’s climate and growing conditions are suitable for this tree, although hurricanes often take them down by the time they reach 50 feet in height.

Norfolk Island Pines have branches that grow in horizontal whorls – that is, the branches are opposite of one another like the spokes of a wheel.   When turned, the growth pattern of the branches can produce a flower or starfish pattern. 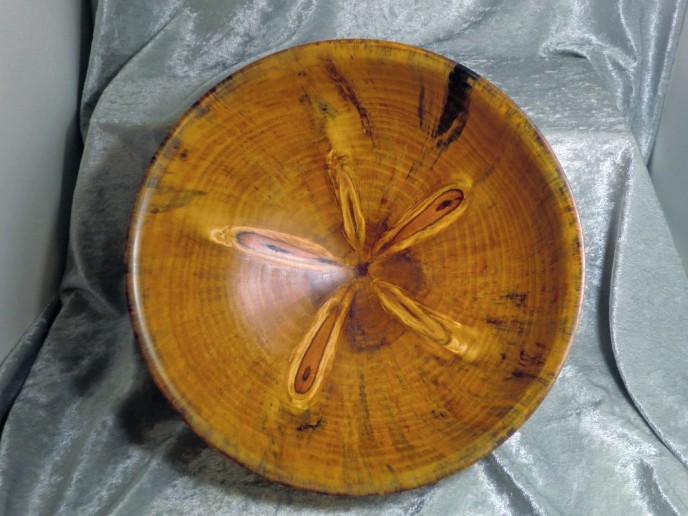 The turning blank was still green when it arrived, so Ted set it aside for a month or two to allow it to spalt.  In the meantime, I was eyeing this turning blank but not for the reason you might think. Ted specializes in stave bowls and segmented bowls, many of which contain hundreds of pieces of wood that he meticulously cuts and glues together to form a turning blank.  Only rarely does he turn a bowl from a single large piece of wood.  I am always on the look-out for wood shavings to add to our compost pile, but only if they are free of glue or chemical compounds.  I knew that when the time came for Ted to rough-turn the blank to remove most of the excess wood, the compost pile would receive a welcome infusion of wood shavings.

Ted rough turned the bowl to about an inch thick, which produced something that was bowl-shaped but lacked definition, and then treated the bowl with Pentacryl wood stabilizer to keep the wood from splitting and cracking as it finished the drying process.  After allowing the bowl to soak up as much Pentacryl as it would absorb, Ted wrapped the bowl in a brown paper grocery sack and set it aside for another month.

After finish turning the bowl to the desired shape and embellishing the bowl with some beads around the rim, Ted sanded the bowl down to 600 grit.  I finished the bowl with four coats of Natural Watco Danish Oil.  I was surprised at how much finish the Norfolk Island Pine bowl soaked up in the first application, but that’s a good thing because the Watco oil is a penetrating oil/varnish blend that hardens in the wood to help protect it from moisture. After the fourth and final coat of Danish oil, Ted set the bowl aside for about a week to let the oil harden completely and then buffed and waxed the finished piece. 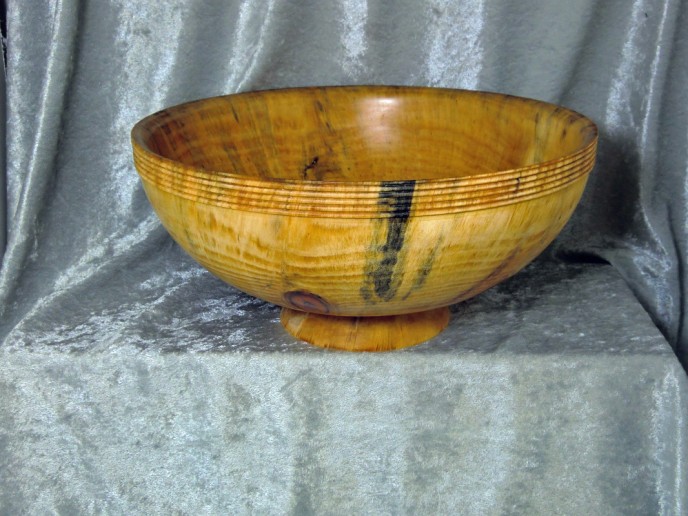